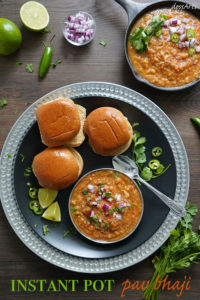 What is Pav bhaji?

Pav Bhaji is one of the most popular street foods of Mumbai. Simply put, the word pav means bread and bhaji means vegetable.

It’s a mix of mashed boiled vegetables cooked in spicy masala and served with soft buttery bread. Fresh chopped onion, lime juice and extra chili peppers are often added on top. You eat it by dipping hot buttery bread into the spicy vegetables.

I learned to make pav bhaji at home early on because it’s always been a favorite. I used to boil the vegetables separately in a pressure cooker and then make some onion tomato gravy in another pot and then cook it all together.

With the Instant Pot, making pav bhaji at home has become way more efficient and only requires one pot!

What vegetables go in pav bhaji?

There are so many varying recipes out there. The basic vegetables used in pav bhaji are cauliflower, potatoes, and peas.

Sometimes I add carrots or green beans and sometimes I don’t. The truth is that it doesn’t really matter what else you add to it. Take it as an opportunity to clean out your refrigerator or freezer!

The taste is not so much in the vegetables but in the masala. After making a basic gravy of onion, garlic, ginger and tomato, you add special pav bhaji masala.

So, what are the ingredients of pav bhaji masala?

Whoa! That’s a lot of stuff right? That’s why it’s easier to buy a ready made mix.

I think the best pav bhaji masala brand is Everest. I've tried many brands and it's the only one that tastes good without getting overly spicy with red chili flavor.

Pav bhaji masala is available at Indian grocery stores and some mainstream grocers as well. Just check the international aisle.

I’m telling you, this stuff is lip smacking good. If you’ve never had pav bhaji, it’s time to step outside the box and give it a try! It’s an easy one pot meal for your next meatless Monday.  If you're not into so many vegetables, you may also want to check out my Instant Pot ragda recipe for some ragda pav.

I originally shared this Pav Bhaji recipe over on Food Fanatic so be sure to check it out there as well along with my other vegetarian recipes.