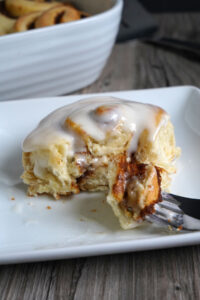 Cinnamon rolls from scratch may seem intimidating but they are so worth it! I can’t say this is a quick recipe but most of the time needed goes into allowing your dough to proof. So, as long as you have time to wait around, it’s not too bad.

Many pumpkin cinnamon roll recipes incorporate the pumpkin into the dough. While those are no doubt just as tasty, I decided to take a short cut and just make a pumpkin filling.

I rolled it out a little larger and cut them smaller to get more rolls. I love the way they turned out. Perfectly fluffy.

The filling includes canned pumpkin puree, brown sugar and all the spices that make up pumpkin spice. Plus a little pinch of cardamom!

The recipe does not use a whole 15 ounce can of pumpkin but a few extra spoons won’t hurt so go for it.

And if you are looking to use the extra canned pumpkin, I’ve got you covered. Check out my pumpkin roll recipe or pumpkin brookies recipe.

Can I Make These The Night Before?

Yes. You can prepare these cinnamon rolls the night before and bake them in the morning. Arrange them sliced in the baking pan, cover with plastic and then refrigerate. Just be sure to let the rolls sit out at room temperature for about an hour before baking.

First measure out the size of each slice and make score marks with a knife. I find it easiest to use plain dental floss to slice through the roll rather than a knife. Gently lift the roll and slide your floss underneath. Cross the two ends of the floss over the top and slice through.