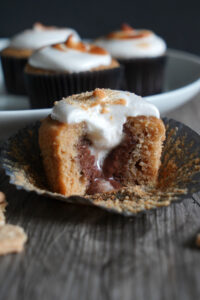 S’mores cupcakes are perfect for birthdays and casual gatherings. Graham flavored cakes are filled with chocolate ganache and a marshmallow topping.

Who doesn't love a good s’more? Gooey chocolate and toasted marshmallow sandwiched between sweet graham crackers... What could be wrong about that? Those flavors were made to be together. That’s why I put them into this cupcake.

My s’mores cupcake is made with graham cracker flavored cake that’s stuffed with chocolate ganache in the middle and topped with a homemade marshmallowy meringue (Gelatin free and no marshmallow fluff from a tub).

It sounds complicated, but the ganache and marshmallow topping are actually easy to make. The cupcakes are very similar to my six inch smores cake recipe.

Ingredients and Tools for S’mores Cupcakes

How to Make S’mores Cupcakes:

This cupcake batter is made using the same reverse creaming method I use in my Oreo Cupcakes. Reverse creaming combines the flour and other dry ingredients with the butter first and then the wet ingredients, leading to a smoother tighter crumb and a flatter top. Once they are baked, let them cool completely while you prepare the filling and topping.

All you need to do to make ganache filling is to mix chopped chocolate or chocolate chips with hot heavy cream. I find it easiest to microwave the cream until I start to see it bubble. Then, pour it over the chocolate and stir slowly until it becomes smooth and silky. Let the ganache stiffen while you prepare the topping.

Make a Swiss meringue by stirring egg whites and sugar in a bowl over a pot of simmering water. The goal is to melt the sugar and raise the temperature of the egg whites to about 130F.

You will need to stir continuously to avoid cooking the eggs. Then, whip the egg mixture until you get stiff white peaks. This can take quite some time so I highly recommend a stand mixer for this step.

To put it all together, core out the center of each cupcake, fill with ganache and swirl on the meringue topping!

You can garnish the top of the cupcake with chocolate bar pieces or graham cracker crumbles. You can also toast the tops with a kitchen torch but be VERY CAREFUL not to burn the cupcake liners.