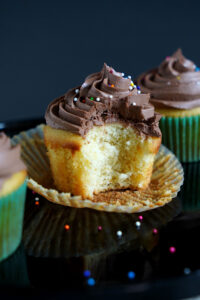 This simple cupcake recipe makes 12 vanilla cupcakes. Top them with your favorite frosting flavor and decorations.

Sometimes you just want a simple cupcake recipe. Am I right? These classic vanilla cupcakes taste good with any frosting and are made with simple ingredients.

To make these cupcakes you will need:

I’ve tried so many vanilla cupcake recipes. The number one problem I have had with them is moisture! That’s why I’ve added a bit of sour cream and oil to this recipe.

Both are fats that help the cupcake retain their moisture. I know, I know, butter tastes better than oil! That’s why I only replaced some of the butter with oil.

How to Make Cupcakes

If you want to go all vanilla, definitely top it with a simple vanilla buttercream. My personal favorite pairing with vanilla cupcakes though is my fudge frosting. It’s the best!!

The cupcakes you see here were frosted with chocolate fudge frosting. To get the swirl, use a piping bag and a 1M size tip. Without releasing pressure, pipe a small amount in the center and then move to the outside and pipe concentric overlapping circles until you reach the middle again.

Top the cupcakes with colorful sprinkles or candy. You can even make your own cupcake toppers! Like these cute trains. See my DIY cupcake toppers post for tips and ideas.

Room Temperature Ingredients: Always use room temperature ingredients to allow for even mixing. Even mixing ensures the fluffiest cupcakes with a nice even crumb.

Filling the Pan: An ice cream scoop (with a spring) helps with filling the cupcake liners evenly with batter. It’s also less messy than a spoon!

Oven Temperatures: Always preheat the oven completely before putting in your cupcakes. Having the right temperature helps the cakes rise correctly. Also, don’t open the oven door! Any fluctuations caused by opening your oven within the first half of baking can also affect the rise.

Freezing Cupcakes: Unfrosted cupcakes can be frozen for up to 3 months. Make sure they are wrapped tightly in plastic wrap and sealed in an airtight container for maximum freshness. Let them thaw on the counter before frosting.

Freezing: Unfrosted cupcakes can be wrapped in plastic and stored in an airtight container for up to three months. Thaw on the countertop before frosting.