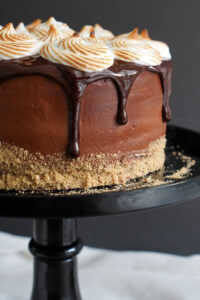 My usual go-to birthday cake for my kid is a requested classic chocolate cake or Oreo cupcakes. So, I was thrilled this year to finally make something different when he asked for a s’mores cake and s’mores cupcakes!

What’s in a s’mores cake?

There are so many ways to make a s’mores cake. You can make a chocolate cake and fill it with graham cracker crumbs and marshmallow fluff. Or…

You can also make a graham cracker flavored cake with marshmallow filling and chocolate buttercream on the outside. Maybe use chocolate ganache? Whole marshmallows on top? Decorate with Hershey bar pieces? So many options!

Here’s what I decided. This s’mores cake is made with…

Chocolate Ganache and Meringue Filling: It wouldn’t be a s’more without chocolate and marshmallows throughout each bite. Each cake layer is topped with a coating of chocolate ganache and fluffy homemade meringue for that classic marshmallow flavor.

Fudge Frosting: I frosted the outside of the cake to give it a finished look. Plus, I’ll use any excuse to make my classic fudge frosting. It’s my favorite! The recipe is not included in the recipe card because you can use any frosting you want or skip it all together. If you want to use mine, just follow the link in the recipe card.

Ganache and Meringue Decoration: I used the extra ganache to layer on the top and drip over the sides. The extra meringue was put into a piping bag fitted with a Wilton 4B tip. If you have a kitchen torch, you can toast the meringue swirls to get this beautiful toasted effect.

This recipe makes a small 6 inch cake. If you are looking for a larger cake, I suggest doubling the recipe and using two 8 or 9 inch pans.

You  may need to re-warm the ganache in a microwave when you decorate the top of the cake, especially if you want a drip effect.

Extra graham cracker crumbs can be used to decorate the outside of the cake.

Cake layers can be made in advance and stored in the refrigerator or freezer tightly wrapped in plastic. The assembled cake tastes best the day it is made. After some time, the meringue filling may get absorbed into the cake layers and won’t be as visible.