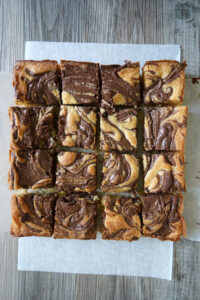 Nutella bars with frangipane are so good you won’t be able to keep your hands off them. Buttery shortbread topped with Nutella and frangipane.

This is a remake of an old recipe. Rather than replace it, I kept the old one too because it turned out to be very different. My old Nutella shortbread bars had the added crunch of sliced almonds along with the frangipane.

These new Nutella Frangipane Bars are smoother and I’ve skipped the layer of almonds. They also have a pretty swirly design!

I love the taste and feel of frangipane (also known as almond cream). What is frangipane, you might be asking? It’s a filling made with almond meal, eggs, butter, salt and a little bit of flour. It bakes a little fluffy like cake but tastes somehow smoother.

Frangipane is usually paired with fruits such as in a pear tart or cherry tart. I wanted to change things up a bit so I paired it with my favorite hazelnut spread and it did not disappoint.

Why You Should Make There Nutella Frangipane Bars

So BUTTERY. Uhm who doesn’t love a buttery crust?

How to Make Nutella Frangipane Bars

Make these bars by first preparing a shortbread crust as your base layer. Mix the butter, sugar, and vanilla until light and fluffy. Add the flour and salt until it all comes together. Press it into a greased 8x8 pan and chill.

The frangipane mixture can be made while the crust layer chills. Combine all the frangipane ingredients in a bowl and mix until smooth and combined.

You can also make a batch of frangipane filling ahead of time and store it in the refrigerator until ready to use. Just be sure to bring it to room temperature and give it a good mix before trying to spread it.

Spread the frangipane over the chilled crust layer. Finally, drop in spoonfuls of Nutella into the frangipane and swirl it in with the tip of a butter knife. That’s it! It’s ready to bake and be enjoyed.

For the Frangipane Nutella Layer

The crust and frangipane layer can be made without an electric mixer. Just be sure to use softened butter so you can mix well with a wooden spoon.

You can serve these bars at room temperature but I find that these bars taste best when chilled.