×
You are here: Home / Ingredients / What is Frangipane (Almond Cream)? 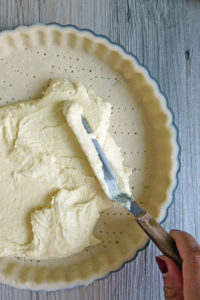 Everything you wanted to know about frangipane, aka almond cream, is all right here. What is it and how do you use it?

Frangipane is a type of custard that is also referred to as almond cream. It’s a sweet filling made with ground almonds, butter, sugar, eggs and either corn starch or flour. To be honest, I had never even heard of this delightful filling until I took my pastry classes. Just one taste of it though and I was in love with its flavor and any recipe we used it in!

How Do You Use Frangipane?

Frangipane can be used as a filling in cakes, tarts and pastries. Because it is made with eggs, it must be baked. The raw filling is thick and smooth. Once baked, it rises and has a light and fluffy cake-like texture.

A popular use for frangipane is as a tart filling combined with fruit. Frangipane pear tarts are a classic French pear tart also known as Tart Bourdaloue. My favorite combinations of fruit and frangipane are with cherries and pineapple.

The Bakewell Tart also uses frangipane. Fans of the Great British Baking Show know it's a classic English confection made of a pastry shell layered with jam, frangipane and flaked almonds.

Is Frangipane the Same as Marzipan or Almond Paste?

Definitely not. Marzipan is a combination of almonds, sugar and corn syrup. It can be rolled out to cover cakes or added to chocolates as a filling. It can even be colored and molded into fruit and flower decorations. I've even used it cover Indian confections like my chocolate burfi.

Almond paste is only a combination of almonds and sugar. It can be added to cake batters and used as a filling but is not as dense as marzipan and can’t be rolled out. You can use almond paste to make frangipane instead of adding almond and sugar separately.

How Do You Make Frangipane?

Making frangipane is simple and takes only a few minutes with the help of an electric mixer. You can follow my simple frangipane recipe and use it in one of my desserts listed below or create your own!

DessArts Recipes That Use Frangipane