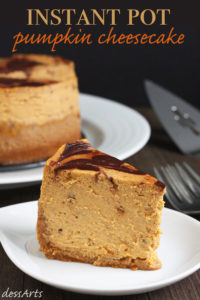 This pumpkin cheesecake is bursting with flavor. Its small size makes it the perfect end to a small family dinner. Plus, it’s made with an Instant Pot!

A while back I posted some results and tips on Instant Pot cheesecakes after testing out some recipes from two trustworthy bloggers. As expected, they turned out flawless and I told myself I would have to revisit with some of my own cheesecake recipes. Well, the season is calling for an Instant Pot pumpkin cheesecake! (Plus, I got carried away at the market and bought one too many cans of pumpkin puree)

The first time I tried to make pumpkin cheesecake, the taste was totally off. It wasn’t sweet enough and it had a sour taste to it. My theory to the sour taste is that I used reduced fat cream cheese (1/3 fat Neufchatel cheese). Maybe it’s just me, but this cream cheese seems to have a slightly sourer taste. If you are choosing, I’d go with the full fat on this one.

So the second time I made it, I changed a few things. First, I went with full fat cream cheese. Second, I opted for cinnamon graham cracker crust. This made the crust much more flavorful. Honey graham crackers are fine too but I would add a dash of ground cinnamon to it. Alternatively, you can try adding teaspoon of pumpkin pie spice to the crust. Finally, I added an extra ¼ cup of sugar to the batter. The result? One darn good tasting Instant Pot pumpkin cheesecake!

Should your cheesecake crack, you can easily fix it by following my method for fixing a cracked cheesecake. As you can see, there was a slight crack above, but because I used the chocolate swirl, I let it be.

We are not fans of whipped cream toppings, so I decorated my pumpkin cheesecake by adding a chocolate marble design. You don’t have to do this but don’t not do it because you are afraid. It’s a lot easier than you think.

Not ready to make it yet? Pin it now and save it for later!

For the chocolate swirl design

It only takes about 30 seconds for ¼ cup of cream to heat in the microwave. You do not have to do the chocolate swirl. It is just to give the top of the cheesecake a design. The chocolate does not go all the way through the cheesecake.

Signup to join my FREE weekly newsletter for recipes, tips and more.