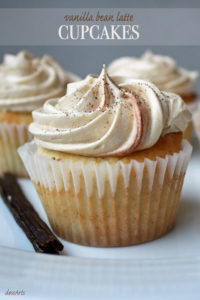 These vanilla cupcakes are made with real vanilla beans, filled with espresso cream and topped with a fluffy espresso frosting. Coffee lovers, say hello to your new coffee cupcakes.

We all know vanilla is a staple ingredient in any baker's kitchen. I probably put vanilla into almost every dessert. Whenever I can, I prefer to use vanilla bean or vanilla bean paste over extract.

I love seeing the vanilla bean specks in the dessert that you can't get from using just the extract.

I've had vanilla on my mind ever since last week's Chocolate Show where I bought some Madagascar vanilla bean pods and vanilla powder (whole ground vanilla pods).

Forget your cappuccino maker! How about a latte in the form of a cupcake instead? Vanilla Bean Latte cupcakes that is!

Or should we call these vanilla cappuccino cupcakes? Either way, you are going to love these coffee flavored cupcakes.

These vanilla cupcakes have a shot of espresso cream filling and topped with an espresso frosting. Double vanilla for a very strong vanilla taste. For this recipe, I've packed in more vanilla flavor by infusing the milk first with whole pods and scraped seeds.

You may also want to see these other recipes using vanilla and coffee:

For the cupcake batter (adapted from Amy Sedaris):

For the espresso filling:

For the vanilla espresso frosting:

For the cupcake batter

For the espresso filling:

For the vanilla espresso frosting: